Giant Sequel to the Best Hideo Kojima Analysis in The World.

Over 350 all-new pages of world-class analysis by yours truly. Coming this Summer, on paperback, hardcover, and e-book, just like the first one!

For the first time ever, a deep dive into the most popular but critically overlooked game in Kojima’s career: Metal Gear Solid 3: Snake Eater. Not even my website has touched this gem with any depth before, but now you’ll get well over a hundred pages of dot-connecting goodness. The hidden meaning behind the game is guaranteed to surprise. I can honestly say that I didn’t even realize how amazing this game’s commentary was until I dug into it for this book, so you won’t want to miss out. It forced me to even go back to earlier games and notice things I’d never seen before.

Metal Gear Solid 4: Guns of the Patriots also gets the major spotlight treatment, taking this website’s famous analysis and taking it to the max. The true intention of the project is exposed, with many examples analyzed.

The Twin Snakes makes its appearance in the grand puzzle of The Kojima Code, and surprising contributions of smaller projects flesh out a pattern that perfectly builds on what the first book established. It stops before Metal Gear Solid: Peace Walker but it is packed with insight that has far-reaching implications for the entire career of Kojima!

This book is a personal triumph. My writing style has gotten stronger, my topics more balanced, and my understanding of Hideo Kojima has expanded to a whole new realm of appreciation. You will absolutely think about his work in a new way by the time you’re done.

Metal Gear Solid V: The Phantom Pain is going to do everything, according to this interview Hideo Kojima did with computerandvideogames.com.

Update: The following picture-painting was under the impression that The Phantom Pain would be released episodically, which it won’t apparently.  The game is simply episodic in how you explore the different missions it offers.

This might be hard to wrap your head around, so let me paint a picture for you.

Afghanistan is huge, and the trailer only shows a relatively small part of the whole area.  Within the area there are a series of clues, “side quests”, and objectives that further the story but also just provide interesting benefits, but initially your goal is to rescue Kaz and escape with him on your back.  You get back to Mother Base (or its equivalent) and plan your next move.  You’re free to go back to Afghanistan and do other things, like kidnap people, steal technology and weapons, destroy enemy outposts, and so on.

Several areas are available with the initial release, including Cuba, and each of them can be revisited for strategic purposes, much like Peace Walker.  There may even be a tug-of-war style fight for territorial control.

Meanwhile, “Those Who Don’t Exist” are hunting Big Boss across the world, phantoms in his own mind, who essentially serve as boss fights in situations where there shouldn’t logically be any.  From a game design point of view it’s a perfect excuse to add new random challenges and extreme situations (flaming unicorn chase) anywhere.

One thing I bet we can count on is travelling the world to recruit new members, such as Emmerich, Quiet, Eli, and Code Talker.  Each of them is probably going to be on a different continent, and have their own aspect of the game to contribute.

Maybe it’s just me, but this sounds like a dream come true.  How the hell will this all work on the current platforms?  I don’t know.  Will multiplayer ever be cooperative?  Will tablets factor into that?  Could be.  We know that Ground Zeroes itself will be solo, but that doesn’t mean it can’t be added later to the main game, now that we know MGSV itself is going to have an online mode.

If Kojima can pull off even half of this stuff, it will be a truly monumental sequel. 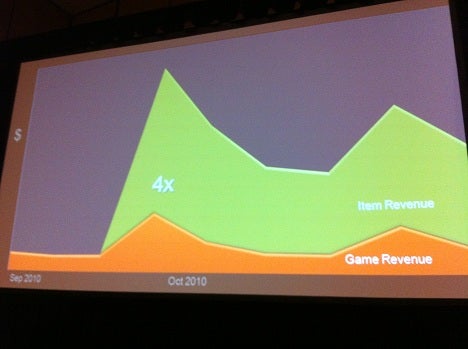 That’s the graph, showing how revenue quadrupled thanks to the “Mannconomy” in which players craft, trade, and purchase individual items introduced by Valve and/or the community itself.  It was so profitable, he says that Team Fortress 2 would always have been free, if Valve had known how successful the business model would have been. (via IGN)

I’ve done some comparisons between Metal Gear Online and Team Fortress 2 before the “Mannconomy”, and I find it interesting how things have changed since then.  MGO is shutting down its servers in June, while Team Fortress 2 is raking in money by becoming free.  This is how it should be, of course.

In part 12 of the Sold Out series, we look at a small, interesting speech given by Big Mama regarding the Paradise Lost Army, and what it really means.