With vengeful tool of justice in hand, the mysterious warrior “Solid Kenny” slices apart Metal Gear Rising: Revengeance in this epic article, which exposes the artificial insides of the gaming community’s gory little cyborg darling.  It doesn’t get any more brutal than “Metal Gear Rising Sucks”.

Not only that, but brace yourself for an unthinkable TWO HOUR VIDEO dissection of the smash hit, with knowledgeable commentary, behind-the-scenes research, and endless razor-sharp arguments for anyone who dares to defend Rising as a worthy entry in the Metal Gear franchise!  If you’ve never cared about the game before, you will after this.

This epic article was created by Solid Kenny, a longtime reader and first time video maker.  To give credit where it’s due, find him on Twitter @SolidKenny87 and on Tumblr to give feedback, ask questions, and follow his ongoing thoughts on the series.  Enjoy!

Earlier this year, I set out to create what I wanted to exist, but no one else would make for me. Today, the result of about five months of blood, sweat, and tears has been released for all to see: “Metal Gear Rising Sucks – An Autopsy.”

My goal was simple; create the definitive critique of Metal Gear Rising: Revengeance, in a similar structure as RedLetterMedia’s reviews of the Star Wars prequels. But even after I had a “final” script, I found myself bombarded with even more thoughts and criticisms. Here’s how bad it got: I ended up having to re-write everything after Part 5 to accommodate these new thoughts.

But even so, there’s still some things that I really wanted to convey in my video, but couldn’t find a place to cram them into. Instead of putting these arguments out to pasture, I decided to write an Appendix to accompany my video, in the form of a guest article for Mr.Wolfe’s site. It’s truly an honor to have my work be featured on the same site that has profoundly influenced my own perception of Metal Gear and Hideo Kojima.

Note: Before you continue reading, it is highly recommended that you watch the video first, as this Appendix expands on many points introduced in the video.

Here’s a quick recap of each of the video’s parts — click on any part’s title to jump there:

Part 1: The Timeframe (2:24): I briefly explain the history of the Rising project, and how the timeframe shift was done to accommodate the gameplay. I questioned the need for this, and explain how this screws up a lot of things, due to Etsu Tamari not taking full advantage of the post-MGS4 “new dawn” timeframe, and instead kept most of everything just as it was between MGS2 and 4, but with more cyborgs.

Part 2: Jack is Back! (But not Rose) (12:28): I explain Raiden’s character arc in MGS2 and 4, and how MGR tries very hard to justify its existence (stuff like Raiden working for Maverick in order to support his family… a plot-point that is only referenced in optional Codec conversations), only to abandon these justifications mid-way through the game (by having Raiden quit his job.) I explained the absurdity of treating Raiden’s family, the most important thing about his character, as an inconsequential footnote.

Part 3: What Metal Gear is really about (22:36): I explain the “Lore Guru” epidemic; know-it-all fans who attempt to rationalize Rising’s portrayal of Raiden (by arguing that Raiden was always doomed to repeat his past.) But in order to do so, they are forced to undermine Hideo Kojima’s core message with Metal Gear Solid; That no one is a prisoner to fate. That everyone can choose their own legacy. That they can find their own name, and their own life.

Part 4: Happy Endings (31:01): I refute the absurd idea that “there are no happy fairy tale endings in Metal Gear!”, by listing how every character in MGS4 (except Mei Ling) got, if not a Happy Ending, at least a happy closure (like Naomi Hunter.) I end the part by acknowledging that, yes, not everyone in real life gets a happy ending, but that’s no excuse not to work for one. Like Snake said, “everyone decides their own fate, no matter where they were born.” Ultimately, Kojima is an optimist; his life’s motto is “to make the impossible possible.”
However, there’s actually a very big hole in my argument, which I address below (in “4. The Sacco and Vanzetti Ending Problem (Addressed.)”)

Part 5: Montage! (Of Wrong) (42:47): I go over a variety of mistakes and idiocies in Rising’s story, such as the idea that Raiden’s couldn’t find a job outside of military work, the idea that Rose was supporting Raiden’s denialism (which I expand on in “2. Jack The Man Child”), and that Raiden “chose” to be Jack the Ripper.

Part 6: Stream of Non-Sense (51:09): I explain how the scene where Sam broadcasts the police officer’s emotions, a highly praised scene in the game, is actually highley inferior to The Sorrow’s river in MGS3, which is dynamically influenced by the player’s actions in the game. I then go on to explain how Raiden’s portrayal in Rising is highly inconsistent, between being a sadist with no ideals, to scoffing at Sundowner with “They’re KIDS you son of a bitch!” I question why Boris and the rest of Raiden’s allys would continue to support him even after he admitted that his cause for justice was a sham.

I conclude that, despite what the game might want the players to beLIEve, Rising is merely a simple-minded action game.

Part 7: Wasted Potential (01:04:54): I explain how Jack the Ripper could have been repurposed as an expansion of MGS4’s Psyche/Stress system, in order to more realistically portray the effects of PTSD on Raiden (as opposed to portraying it as a superpower.) I also explain how, although Etsu Tamari meant well with certain characters (Sunny, Blade Wolf, Sam), his efforts were ultimately undermined by Raiden’s horribly inconsistent portrayal.

Part 8: What is MGRising’s message? (01:19:33): At last, I ask the ultimate question about Metal Gear Rising. I explain how [redacted] is actually the game’s message giver, which is sooooo wrooooong and undermine’s the Saga’s anti-war message.

Part 9: The Metal Gear Name Sells (Or, Business Kojima vs Creative Kojima) (01:32:22): I explain Kojima’s internal struggle between his creative desire, and his obligation to keep Konami profitable. I explain the business reasons that led to MGR’s existence (in order to allow Kojima more creative freedom for MGSV.) I explain all the ways that Kojima undermines MGR’s place in the Metal Gear timeline, though I ultimately conclude that, canon or not, Metal Gear Rising has no value as a Metal Gear game.

When all is said and done, until Kojima finds a new sucessor to replace Project Itoh, if it’s not “A Hideo Kojima Game”, then it’s not really Metal Gear. Period.

Part 10: Why All Of This Matters (1:52:48): I explain how Kojima’s Metal Gear has influenced me, and how MGRising undermines the core aspects of Kojima’s message that I’m so passionate about. Ultimately, I, like Raiden, choose to throw away my “dog tags”, and find my own name, and my own life.

Alright, so you watched all of that, right?  This rest of this article will assume you have. The following double-dose of Rising hate starts with a question of complaint priorities, and then addresses a wide range of issues brought up in the video, concluding with my own motives in this behemoth of a project.  Let’s get started!

1. “We see a few general complaints about the Over-The-Top tone, and Raiden being out of character…” 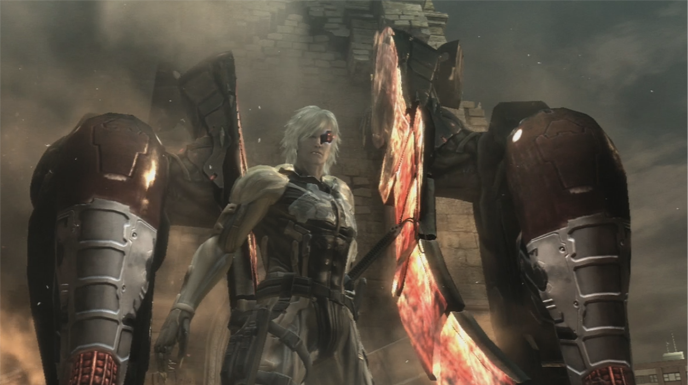 My fellow Rising detractors might be disappointed by that I primarily focus on the latter aspect (Raiden being out of character), and gave very little attention to the former (the game being over the top). In fact, in Part 8, I made it a point that I wouldn’t even bother complaining about the absurdity of Senator Armstrong.

As surprising as this may sound, I actually LOVE the game’s stupid fucking tone. It was like Ghost in the Shell with swords and hair metal. It was awesome!

…Ok, Senator Armstrong might have been pushing it (allot), but that was primarily because there was allot about him to take in almost all at once; his detestable personality, the fact that he randomly has powers, his insane ideals, the fact that his powers are caused by NANOMACHINES, the fact that when he PUNCHES THE GROUND IT ERUPTS WITH HUGE WALLS OF FIRE… and as a final kick in the crotch, (as I explained in Part 8) he turns out to be the main message-giver of the game…

All of this was tacked on at the very end, unlike Colonel Volgin, who was introduced very early in MGS3, so we could more easily adjust to the character’s existence in this game universe.

But besides that, everything fell under the “he’s a cyborg ninja, he can do this shit” umbrella. The same umbrella that “Gray Fox being able to hold REX’s leg” or “Raiden being able to hold back Outer Haven” fall under. No one complained about the Gray Fox scenes in The Twin Snakes because they made sense in the context of the character (unlike, say, Solid Snake jumping off of a missile.) Rising is basically that, except more frequently.

And yet, it’s the game’s “stupid tone” that gets the harshest criticism. And because that’s the primary focus of many people’s complaints about the game, MGR-defenders are able to undermine the MGR-detractor position with “comparisons to the Cobra Unit, or some other crazy thing from past games.”

By focusing on the trivial problem of MGR’s marginally sillier tone, the REAL problems of Metal Gear Rising’s story have long been overlooked.