Overarching problems are compounded by underlying problems, which are less obvious because they’re buried beneath the game mechanics and technical systems.  We have the cover system,  the targeting/infinite ammo system, the simplified movement system, the “overwatch” system, the absence of randomized maps, and the “enemy alert” system.  None of these are a big deal on their own, but when you combine them (which you obviously will when you start playing,) they reveal the sloppy, shallow core of this game’s tactical gameplay.

Here’s a common scenario that perfectly illustrates what I mean: your turn starts, and you have no idea where the enemy is, so you decide to spread out and try to find them while taking cover behind various objects.  You find nothing, until your final unit slides up to an unexplored corner.  Then suddenly, you reveal two groups of enemies, which you should be happy about, right?  After all, you can see them, but they can’t see you.  Wrong.  Even though your unit is safely tucked behind the corner of a building where nobody should be able to see him, the aliens automatically become “alerted” as soon as they’re in view.  You begin to groan as you’re forced to watch a flamboyant closeup of the aliens striking a dramatic pose for you, like some kind of Power Ranger villain; not only because it’s stupid as hell, but because that’s the twentieth time you’ve had to watch that closeup today.  Enemies are always bunched together into groups, where they apparently have nothing better to do than stand in circles and wait for you to drop in on them.  And when you inevitably do, they always trigger a cringe-worthy “alert” cinematic, which gets extremely repetitive, extremely fast.  Don’t assume that just because you discovered two groups of enemies in a single move, you’ll only have to watch one alert cinematic!  They’ve been waiting patiently for this moment, and they’ll both have their turn, whether you like it or not (you won’t). 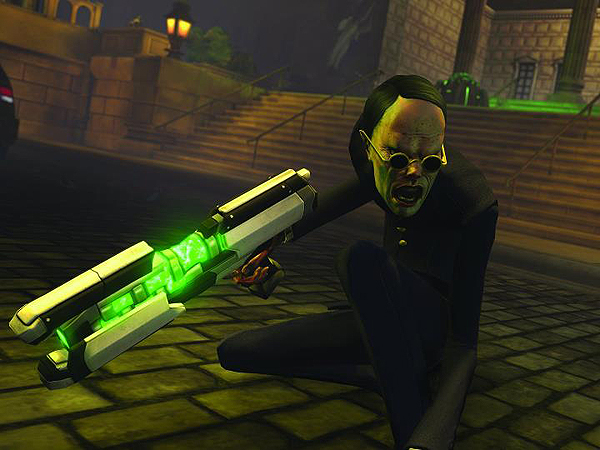 “Bwah! I’m so creepy! Please don’t pay attention to the lazy enemy behavior in this game!”

These cinematics are designed to misdirect your attention, like a parlour house magican who doesn’t want you to notice the trick he’s pulling.  The whole pretense of “alerting” the enemy — and the reason they force you to watch it every time — is because the lazy game designers wanted to save the the effort of placing enemies intelligently or by some system of logic, by simply interrupting your turn to give the enemy a free movement opportunity!  That’s right: six enemies, at the end of YOUR turn, now have the chance to run, jump, fly, and scuttle into perfect cover positions and vantage points — which they will undoubtedly make use of during THEIR turn, which starts immediately!  Without the alert cinematic, this would just feel awfully unfair, wouldn’t it?  I mean, why should they get an advantage, when I’m the one who’s got surprise on my side?

This isn’t a random occurrence, dear reader.  This is how the whole game operates, from start to finish.  Happening across an enemy might happen just as easily at the start of your turn, in which case you’d have an entire squad remaining to deal with them before their actual turn starts, but either way, they get to move into position first.  Tough luck, bro!  Maybe next time you’ll know better than to explore areas at the end of your turn!  (Pro tip: if you care at all about gaining a tactical advantage, your tactics will devolve into a game of managing your own ignorance.  Explore one area at a time, then end your turn early so that you don’t end up alerting groups of enemies with only a few units remaining.)

So now it’s the enemy’s turn.  Thanks to the free move they got at the end of your turn, they now easily flank your sitting ducks, find even better vantage points, and shoot away at you, as you sit with your thumb up your ass.  Or, if you bothered to keep a few people in “overwatch” mode, you may be lucky enough to trigger some free reaction shots as they wander into view.  Heck, if you anticipated this scenario and decided to put everyone into overwatch mode, even better.  Right?  Sorry, but no.  It only takes a single unit to trigger EVERYONE you’ve placed in overwatch mode, since a) the enemy keeps moving more into the view of your team, even as the first guy is lining up his shot, and b) your team is retarded, and doesn’t hold their fire or take turns in order to find out whether the first guy killed it or not.  In other words, they blast away at the poor bastard all at once, wasting their ammo and ending overwatch mode for the remainder of the enemy’s turn.  I’ve watched as a single, harmless drone floated into my ambush and got shot by five snipers in a row — the first one killed it, and the other four shot a blank space.  What happened after that?  A huge floating death machine hovered into plain view of them all, totally safe and sound.  Tell me: is that fair?  Is it logical?  Is it fun?

The underlying bullshit of this game’s rules are certainly something to get used to.  Consider the fact that most actions automatically end your turn, even if you haven’t moved yet.  What’s the logic behind being able to move, then shoot — but not shoot, then move?  Why does the game assume I’m finished with my turn just because I threw a grenade?  It’s insane.

So is the simplified movement system.  By removing your ability to move step by step, and essentially forcing you to be in cover at all times, you have to commit to moves that you wish you hadn’t made.  In the original X-COM, your unit automatically stops as soon as he discovers an enemy, giving you the peace of mind of being able to explore quickly and react instantaneously.  In this game, your unit commits to a move whether he ends up in a death trap or not.  This wouldn’t be such a problem if you had the freedom to shoot wherever you wanted, which would allow you to blast away cover and open a line of sight without having to run there personally, putting yourself in danger.  Destructibility exists in this game, but it’s only triggered by explosions and missed shots; you can’t target walls.  You’re only allowed to shoot at enemies, and it becomes so silly that sometimes you’ll hope you miss, just so you can destroy the wall behind the enemy.  Lazy design choices mix in strange ways, creating emergent problems.

Missing a shot is always frustrating, but it’s taken to a new level in this game, as your bullets sometimes destroy scenery, sometimes do nothing, but never hit a bystander — even when the graphics show the bullet pass directly through them.   That’s because the game doesn’t use real trajectories and honest calculations.  I’ve literally watched one of my plasma bolts hit the enemy’s face, leaving a bright burning texture where it landed, only to have the game tell me it was a “miss”.  What the hell, game?  How embarrassing for Firaxis.  I’m sure that’s why, more often than not, missing causes your units to fire into space, comically, like they’re aiming for a bird in the sky.  Not only does this look stupid, but it makes a fight feel staged, like pro wrestlers.  On the other hand, I saw countless examples of shooting clear through a solid steel wall and hitting their target, leaving the wall intact.  I could hardly believe my eyes.  How damn lazy do you have to be, to design a game this way?  I mean, they’re smart enough to realize it looks dumb for lasers to pass harmlessly through nearby enemies, so instead they make your soldiers shoot into the sky?  Much better!

Honest trajectories give you the chance to kill a nearby enemy, destroy a piece of wall, or otherwise create happy accidents, which makes every shot feel important and dramatic.  It also means you need to be careful of friendly fire, civilians, and your soldier’s accuracy.  In the old X-COM, I loved watching my shots sail across the map, sometimes narrowly passing through two small windows of an apartment building, only to nail one of some poor pixelated ET, and other times straying just enough to blow up a gas pump and trigger a massive explosion.  In this game, I’ve seen my soldier shoot through three teammates, a stone ceiling, and a fellow enemy, and only hit the enemy behind them all.  However(!), we can’t have the freedom to shoot wherever we want, because units have infinite ammunition, which means players would just sit back and blow up everything using our endless ammo if we had the chance.  And of course we need infinite ammo, because otherwise we’d need to carry it around in our inventory, manage our supplies, and think about our spending!  It’s much better to have a system where nothing makes sense, and just hope people go along with it.

To illustrate, let me give you an example that I love.  Big important mission.  Have to collect special device from a crashed UFO.  New, crazy enemies introduced along the way.  I finally get to the special boss room, and get massacred.  I get frustrated, and decide to load my game from an earlier point and try again.  (By this point, the immersion of the game is gone, along with respecting failure.)  This time around I happen to miss a shot break open a section of the special boss room.  Huh!  Perfect chance to test what it would be like if we could destroy scenery, like the old days!  So I position all of my units outside the newly created hole, put them into overwatch mode, and get one of my guys to run past — thus triggering the stupid “alert” mode of the enemies inside.  Sure enough, they scatter around trying to find appropriate cover.  However, because the room was designed to be entered from a single direction, they have nowhere to go and run directly into my ambush.  Without moving, I repeat this process three turns in a row, killing one each time.  Nobody in my squad is hurt, much less massacred.  I smirk as the special mind-controlling boss character is killed without the slightest bit of trouble.  The AI is a joke, and only knows how to look for cover and take advantage of the non-random map design, but with a little bit of freedom I’ve flipped the entire challenge on its head.  And that’s why the game can’t afford to give you real choice.

All those red enemies showed up in a single turn. The guy with 20 health is the “Muton Berserker”.

Speaking of non-random maps, they can be suffocatingly small.  Here, you can see the total width of the map in a single screen.  How is anybody supposed to get creative with so little room to move?  When I heard maps weren’t generated randomly I assumed we’d see elaborate level designs that simply wouldn’t be possible otherwise, but instead we have one small, dense, and straightforward urban area after another.  What happened to the atmospheric farmyards and bright deserts?  They’re gone.  What we have instead are some of the most unnatural looking forests I’ve ever seen.  This game literally can’t handle something as simple as sloping terrain, so the few forests you do get to see look like an uglier version of Minecraft.  This is done to give you abundant cover, I suppose.  A game with some level of simulation might, instead, let you kneel or lay down.  Ah well.